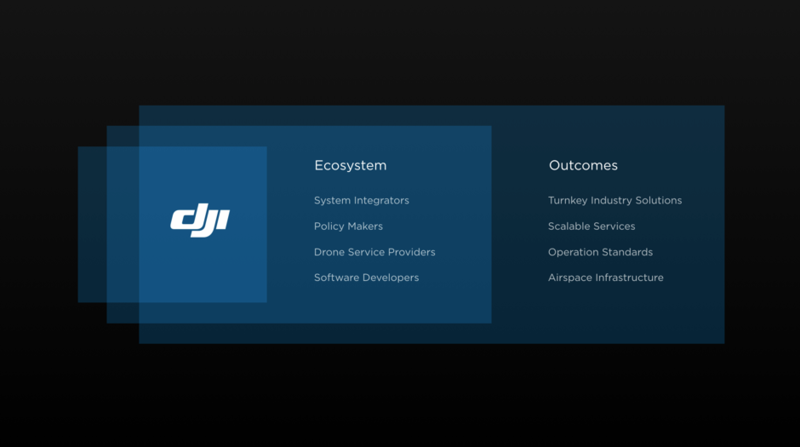 Recent FAA registration numbers illustrate that over 100,000 “non-hobbyist” drones occupy the skies across the United States. Today, these drones are reinventing the way firms manage assets and projects by allowing firms to acquire data about their operations at a scale and resolution never before possible.

To conduct these missions, firms are heavily reliant on drone platforms made for “consumers” or “prosumers” – roughly 60% - and, more specifically, drones made by DJI.

This bewilders many outside the industry, as they see the majority of business adopters utilizing consumer technology for commercial purposes. For those within the industry, they recognize this as a result of DJI’s strategy to rapidly expand the adoption of commercial drone technology by enabling its consumer drones to act as all-in-one, extensible platforms. But to explain that, you need to look back at the beginnings of the commercial drone industry.

DJI originally built components for remote controlled aircraft. As the company grew, it became increasingly obvious that there was a tremendous opportunity in integrating disparate technologies to form a drone. Everything from a flight controller, transmission system, gyroscope, gimbal system and more. Over time, DJI combined these various components into a ready to fly platform, forming the Phantom product line. As a result, the industry boomed and a new generation of photographers embraced a new way to view the world. Aerial photography quickly became ubiquitous, appearing the front pages of magazines to your own social media feed.

Driven to accelerate this growth, DJI looked towards the future. Certainly, DJI could capitalize on its success by steadily improving upon the “camera drone”, but DJI was more concerned with how to push aerial robotics technology beyond consumer and professional photographers and into widespread commercial applications? Despite introducing an innovative imaging tool, to push drones into commercial applications, DJI would need to provide service, software, training, integration and more – all to a variety of sectors with little information on which would readily adopt this new technology. DJI took a unique approach and opened its technology up to developers – letting the market decide.

What started as a research project has enabled dozens of companies to form – culminating in a patchwork ecosystem that collaborates to add value to the core drone technology. One example of the ecosystem’s growth is the amount of usage seen from the DJI Mobile SDK, a library of tools to develop custom drone applications for mobile devices. Developers have activated the Mobile SDK 2.7 million times since its release, up from 150,000 in 2015, showing significant growth in the market and ecosystem.

This DJI commercial drone ecosystem has risen to tackle the challenges of scaling the commercial drone market, with solutions that make drones applicable to specific industries and plug drone data streams seamlessly into existing workflows.

Next Steps for The Market

With DJI’s commitment to the commercial drone market through the formation of DJI Enterprise in 2016, DJI does not intend to push out its developer or partner community, but instead to multiply the industry’s efforts to form drone solutions that redefine standard business operations.

The support from DJI Enterprise has come in the form of standard tools like the M200 Series and FlightHub. These products allow the ecosystem to transition over to products that are specifically engineered for commercial use – providing the base technology layer for more robust and scalable enterprise solution offerings.

DJI is exploring additional ways to collaborate with a and enable the commercial drone ecosystem. One recent example is the introduction of the Wind Series – platforms that are customized in partnership with DJI’s system integrators – and more partnership avenues will open in 2018.

Commercial drones are being deployed by firms in a broad array of industries, from agriculture to public safety. For drone technology to be deployed at scale, enterprises expect solutions that are seamless, sophisticated and integrated. Only an ecosystem can address such a diverse market and DJI will play its part as technology innovator and ecosystem facilitator – the question is, will you join us?

Join the DJI Enterprise ecosystem as a channel partner, system integrator, software developer or more and help advance the adoption of drone technology. Contact us at enterprise@dji.com

▪️ Looking to deploy drones across your sites? Contact us at enterprise@dji.com today