A New Use of Agriculture Drones for Global Public Health

219 million people suffered the effects of malaria in 2017, resulting in 435,000 deaths. It’s easy to grow numb to the death caused by malaria when the figures reach this kind of scale. 92% of all malaria deaths in 2017 were in Africa, and over 60% were children under the age of 5.

These numbers actually represent an improvement over the historical devastation wreaked by malaria, which saw a peak of around 930,000 malaria deaths in 2004. The global effort to combat malaria has seen promising results – the widespread adoption of bed nets and indoor pesticide spraying in malaria hotspots has helped prevent mosquitoes from biting and spreading the disease. 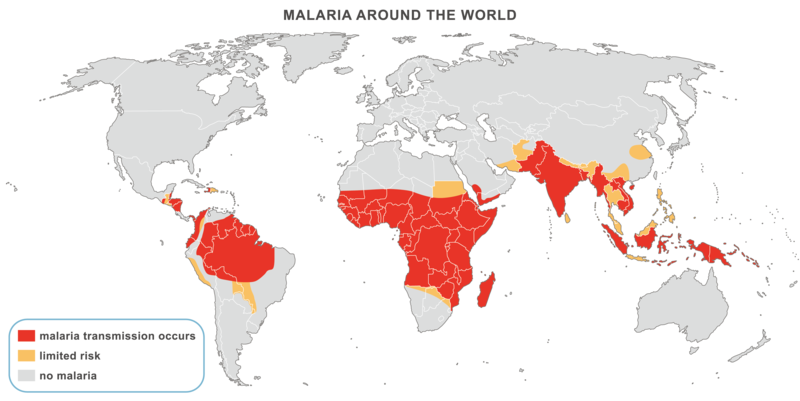 However, in addition to a troubling plateau in anti-malaria funding, there is increasing evidence that mosquitoes are developing resistance to insecticides. Worrisome statistics from the 2018 WHO report on malaria show that in recent years, the 10 African countries with the highest malaria burden witnessed a 3.5 million increase in the number of malaria cases. We stand at a critical turning point where innovation and a collective effort are essential to eradicate malaria.

Because female mosquitoes lay their eggs in shallow, still waters like marshes, swamps, rivers banks, or even irrigated rice paddies, we can, in theory, target these bodies of water to disrupt the mosquito life cycle from egg to larva to pupa and finally to adult. By bringing the fight to the mosquitoes’ breeding sites, we can suppress their populations and ultimately the spread of malaria. 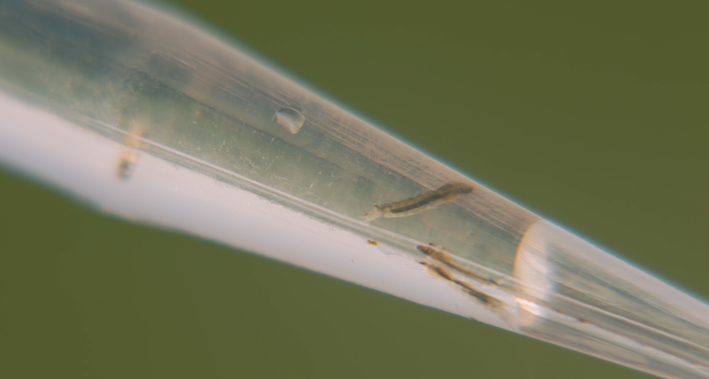 Conventional LSM is limited by several factors. Mosquito breeding sites are traditionally treated with harmful pesticides which can be problematic for use in certain malaria hotspots, like Tanzania, where rice is a staple of the diet, and irrigated rice paddies are an ideal breeding environment for mosquitoes. Moreover, manual application of pesticide exposes backpack sprayers to both chemicals and mosquitoes as they slowly slog through these shallow waters.

Considering the limitations to conventional LSM, Mr. Welter and Dr. Knols believed that they had come up with the ideal solution:

Also known by its brand name Aquatain, this biodegradable, non-toxic, silicone-based liquid has already been demonstrated by Dr. Knols to be viable for LSM. A small amount of Aquatain, when poured on a body of water like an irrigated rice paddy, will spread across the surface where it forms a thin film. When mosquito larvae and pupae swim to the surface to breathe, they encounter the Aquatain layer which serves as a barrier and prevents them from breathing atmospheric oxygen. Within two days, all of the mosquito larvae and pupae drown. Normally poured by hand, Aquatain is ideal for smaller bodies of water like buckets in your backyard garden, but for larger bodies of water it isn’t possible to apply it in a cost effective, comprehensive way.

“The use of spray drones proves to be essential in efficiently treating large rice fields, because spraying by hand is very time consuming and using a helicopter is too expensive and simply not realistic.” – Dr. Knols

In 2017, after much idea incubation, Anti-Malaria Drones contacted DJI inquiring about a drone that could spray Aquatain. Eduardo Rodriguez, Europe Product Manager, DJI Enterprise, immediately recognized the potential of this proposal and personally led the project. The Agras MG-1S, a precision agriculture drone, was identified as the most promising solution for this mission. However, initial tests performed in Frankfurt quickly revealed that the MG-1S, in its off-the-shelf form, was not powerful enough to spray Aquatain. While its membrane pumps are excellent at dispersing water-dissolved fertilizers and pesticides, they struggle with the viscous, honey-like Aquatain.

Eduardo, unperturbed, persevered in pushing a customization project. At the recommendation of Aquatain’s manufacturer, Eduardo contacted the Italian pest control company, Bleu Line, which supplied him with three powerful mechanical pumps. Eduardo then sent these to the DJI Agras’ R&D team who began the customization process.

From an MG-1S, the original stock membrane pumps were removed and the new mechanical pumps were installed. Each pump’s ports and cables were redesigned for integration with the drone platform. In addition to hardware modifications, extensive software redesign was undertaken, including the rewriting of the flight controller algorithm, and the installation of custom firmware on the drone and its remote controller.

As of today, there are only two customized Agras MG-1S units in the entire world: one featuring a single pump, another featuring two. 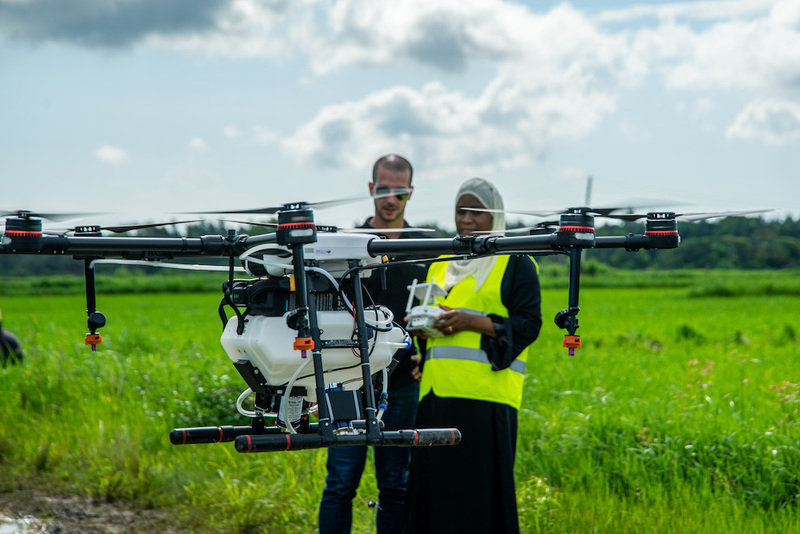 Meanwhile, Anti-Malaria Drones was working tirelessly coordinating with governmental and regulatory bodies to secure approval for this drone spraying project. Tanzanian Flying Labs, a division of WeRobotics which aims to foster local knowledge hubs in the Global South, provided vital support in navigating the logistical hurdles in bringing this project to life. Additionally, the efforts of the Zanzibar Malaria Elimination Program (ZAMEP) and the State University of Zanzibar (SUZA) helped enable DJI to finally secure the required permits to import two customized agriculture drones across international borders, to fly them, and to conduct scientific investigations.

Feet on the Ground (and Drones in the Sky) in Zanzibar

“It has taken a few years…which mostly had to do with getting the permits to fly the drone.” – Dr. Knols

In the last week of October, after years of planning, Eduardo, Dr. Knols, a team of entomologists including Dr. Wolfgang Richard Mukabana from the University of Nairobi, as well as representatives from Tanzanian Flying Labs, ZAMEP, and SUZA all met in Zanzibar. Armed with all required permits and two customized MG-1S platforms, the team was ready to fly, spray, and measure the effects. 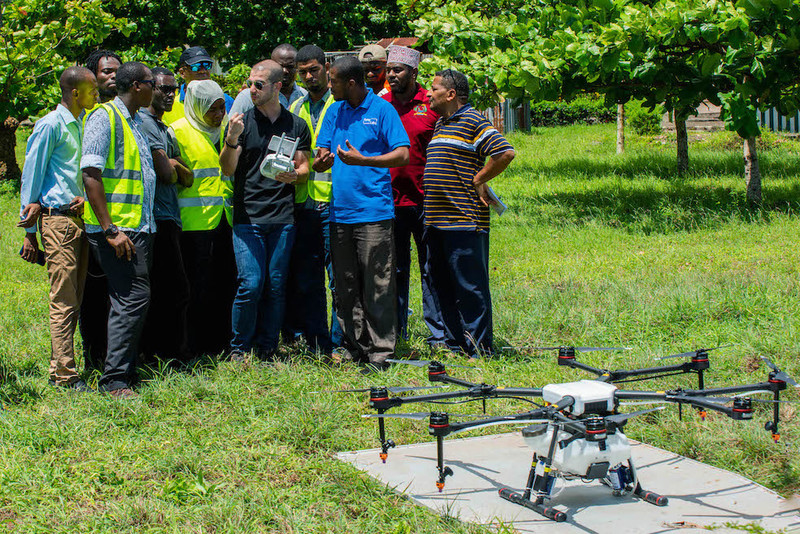 Professional pilots from Tanzania, Kenya, and Uganda gathered to receive hands-on training on flying the MG-1S and deploying Aquatain on irrigated rice paddies

“With a drone, the spraying of Aquatain is ideal because the propellers agitate the water, allowing for a faster, efficient, and homogenous spread.” said Eduardo. “Not only is it faster and more efficient than spraying manually, it is also safer.”

At the same time, Dr. Knols and Dr. Mukabana, supported by the Zanzibar Ministry of Health, kicked off a systematic investigation to measure the effectiveness of Aquatain spraying.

Over the course of the experiment, entomologists will gather samples of water across the nine rice paddies, and will quantify the number of eggs, larvae, and pupae in each. Additionally, as any larvae and pupae develop into adult mosquitoes, they will be caught by nets placed over the water called emergence traps where they can be counted. The numbers of eggs, larvae, pupae, and adult mosquitoes produced by each rice paddy can then be extrapolated and compared. 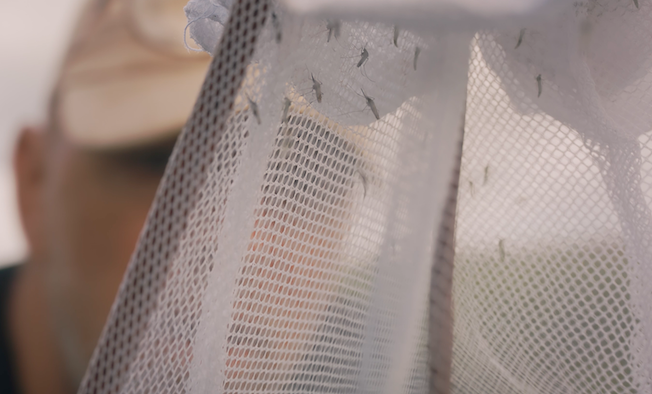 This is the first time an experiment like this has been attempted and DJI is eagerly awaiting the results. Findings are expected to be published in 2020, and they will help determine just how efficient drone assisted LSM is at controlling mosquito spawn rates. In addition, comparisons between different rice paddy groups will inform on which concentration of Aquatain provides the best coverage. Because spraying 5 ml/m2 takes five times longer than just 1 ml/m2, spraying higher concentrations of Aquatain require more flight time and battery swaps, so this data will help establish best practices in the future.

In the meantime, the two modified MG-1S drones have been left in the hands of Tanzania Flying Labs, who will continue to host demonstrations and training sessions for these anti-malaria platforms, as well as promote the impact and use of precision agriculture drones in Africa.

“It takes less than two hours to train one person,” said Eduardo. “Flying the MG-1S is easy. It’s like a big Phantom. It’s very feasible to scale this project up through education, awareness, communication, and engagement. It’s all about the data we’re collecting. If we see a success, we can hope to see a huge rollout.” 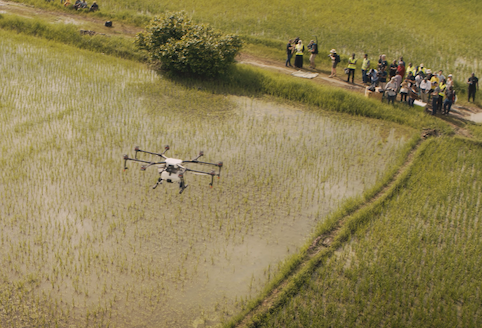 We’d Love to Hear From You

DJI is proud to join the fight against malaria. We strongly believe that technology, innovation, and collaboration can help make the world a safer, healthier place.

We love to hear about any way drones are used for good.

If you have any stories about innovative drone use cases, please let us know!