November 8, 2018, a forest fire tore through the towns of Paradise and Magalia in Northern California, destroying more than 18,000 structures  and killing 85 people1, with some lives still unaccounted for. 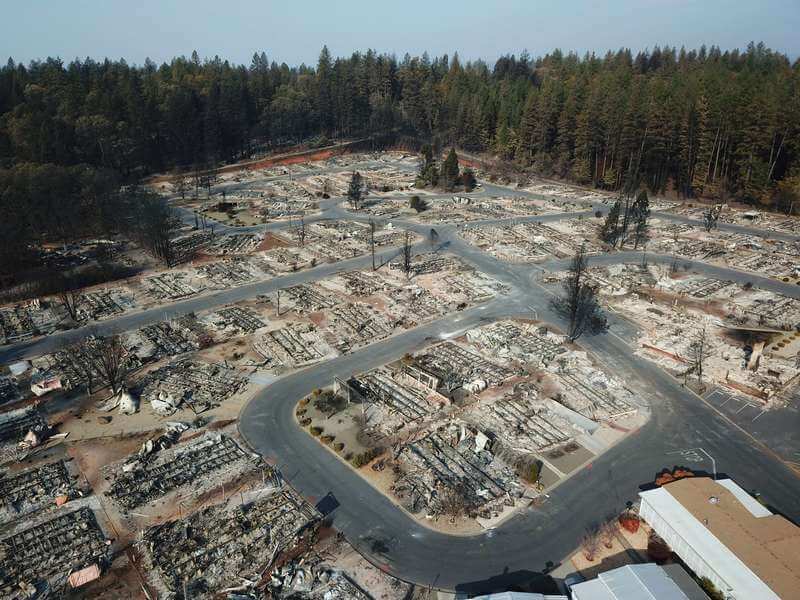 Drones were used to map towns after Camp Fire

Romeo Durscher, Senior Director of Public Safety Integration at DJI, was at the scene supporting 16 Northern California emergency responder agencies on the disaster response mission.  He recounted “There were tears ... when we came across the burned wheelchair in the driveway, or the many burned animals.” It was  later called  “the deadliest and most destructive fire in California” by popular media.

The response mission teams sent their drones on 518 different mapping flights through smoky conditions, and collected 1.4 trillion pixels of data that were georeferenced and stitched into map formats. With up-to-date visuals, fire team charted the damage, and planned their next steps. The maps were even used by search and rescue teams to spot missing persons who may be in the area. Wildfire victims also made good use of the maps. With entire neighborhoods mapped, homeowners were able to submit the imagery to insurance providers to process claims immediately — a process that traditionally can take days or weeks. Many have used the imagery to gain access to FEMA relief funds for the families affected by the fires.

A growing number of out-of-control wildfires in North California, like the “Camp Fire” and the blaze in the Yosemite region, have begun to reveal the benefits that unmanned aircraft systems (UAS) provide for response and recovery operations.

“It goes back to the old saying,” David Danielson, one of the two lead pilots for the Los Angeles Fire Department (LAFD) UAS program said, “a picture is worth a thousand words, right? You're creating that situational awareness, you're mitigating risk, you're preventing injury to the firefighters, and you're preserving the property that you're trying to save.”2

Drones are particularly crucial for forest fires that tend to get out of control quickly and that put both pilots and crew at risk. There’s only a small containment window between when the fire starts and when it gets out of control. Drones give firefighters a bird’s eye view of the terrain and helps them determine where the fire moves next so they can swiftly make decisions about where crews should go and who should be evacuated.

If you’re a firefighter responsible for forest fire response, mitigation and rescue, the benefits of drones are immense. We’ve detailed the main 4 benefits with supplemental stories below.

A drone helps you decide within minutes the type and amount of resources to send to the scene. Some drones are also equipped with thermal sensors, which uses infrared radiation to help first responders locate heat signatures of humans and fire hotspots that show where fires are most likely to spread. Even before your personnel arrive on the scene, commanders are able to make decisions just from these images live-streamed to their computers.

On August 4th, 2018 a fire hit the German town of Hechingen. Firefighters had to fight against winds that were spreading to nearby wooded and populated areas. The creeks had dried out while the first fire truck that arrived carried only 2,000 liters of water. 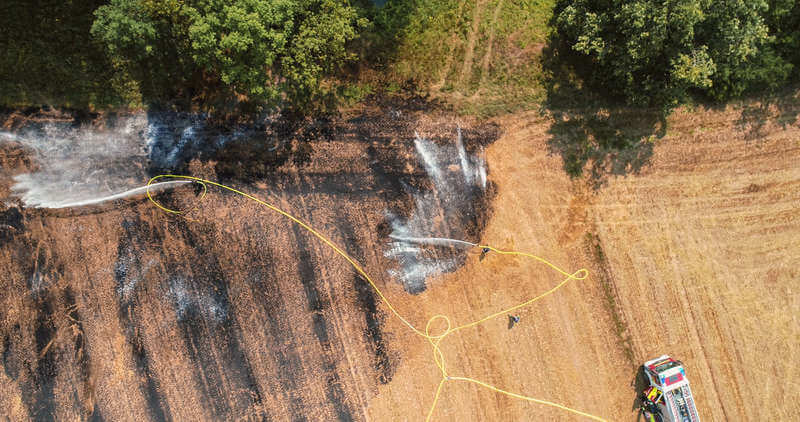 View from above helps to position the fire trucks and hosepipes

Hechingen’s Fire Brigade deployed DJI’s Matrice 210 ruggedized commercial grade drone, a Zenmuse XT thermal camera, and an X4S high definition visual imaging camera. These fed information to the incident commanders and helped them know where to direct their resources, how many units to send and where to increase water supply.  At the end, the crew extinguished the blaze with only 5,000 liters of water mixed with compressed air foam. The drones not only helped them save water but more importantly hastened reaction time helping the Brigade send crews faster to the scene with the exact manpower, units and supplies.

“The biggest advantage came to light during the search for hotspots and extinguishing them,” Hechingen’s Fire Chief Commander Bulach later told DJI, “The simultaneous deployment of the XT and X4S provided me with exact information about where to delete the hotspots and how long until we reached a safe state.”

Drones help you monitor your crew to make sure you're sending them in the right direction, that they’re safe and to help you determine whether to send backup forces.

On August 13th, 2017, Yosemite firefighters battled a 9-day blaze in Southfork, California, that was complicated by weakened timber trees in the nearby region. Flying planes in the tight canyons was dangerous due to a bellowing column of smoke. At the same time, an unexpected thunderstorm spread the fire, blurring the firefighters’ primary containment line and threatening to spread to nearby villages.  The Yosemite fire-force used a DJI drone with the Zenmuse XT thermal payload in their pre-shift early morning hours to map fire lines and livestream information to controllers for operational decisions and situational awareness.  Tony Eggiman, Menlo Park FPD Fire Captain recalled, “the operations major told me later it brought his blood pressure from about 200 down to about 100. He was really happy.”

With aerial intelligence captured by drones, incident commanders can make better informed decisions that keep firefighters safe while they plunge into fire and other dangerous spots to save other peoples’ lives.

3. Drones Enable Fast Mapping for Incident Response as Well as for Post-Incident Recovery

Drone solutions for forest fire response typically carry two different cameras: a visual camera and a thermal camera. The visual camera gives you a real-time view of different situations, able to easily spot things such as your fire team or nearby equipment. The thermal camera scouts for heat signature of the human or fire hotspots.

Drones fly lower than helicopters, providing a more nuanced picture of the situation, and can navigate in tight or dangerous spaces where no helicopter pilot would dare to go. With thermal imaging capabilities, they can locate hotspots at a fire scene within seconds, and see people trapped even in areas of thick smoke.

Drones also play an important role after the fire has been put out. During the Carr Fire, crews piloted low-flying drones to capture 360-degree images of the destruction. For the residents forced out of their homes, this provided invaluable information on property damage to assess insurance claims in a faster time, letting victims more quickly take steps to rebuild their lives.

4. Drones Give you Accurate Intelligence for Informed Decision Making

Wildfires often involve large-scale operations where the incident commander must make decisions on personnel and resource deployment. Drones are effective intelligence generators that can capture detailed data and information from the field, and live stream back to the command center. By having that real-time aerial view, you can see exactly what’s happening and don’t have to rely on second-hand information. You know what’s going on and where. You can also monitor your crew to see their location and that you’re sending them in the right direction.

Drones allowed firefighters of the Gaoming district, Foshan in South China to expertly evaluate 960 people when a fire broke out on Lingyun Mountain near the area, December 12, 2019. 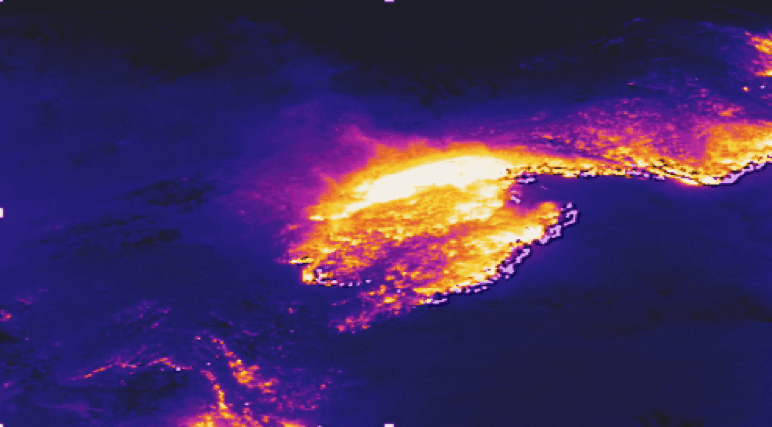 As Los Angeles Fire Department (LAFD) Battalion Chief Richard Fields, program coordinator, told the Board of Fire Commissioners in a March 2019 report3, “Timely and accurate communication is essential in getting the right resources in place to mitigate an incident." 4

Drones have gained a foothold in the sphere of public safety and forward looking government agencies are expanding their use in areas including environmental services, public works, transportation and rescue services. Download DJI’s whitepaper to explore the Best Practices For Deploying Drones At State And Local Government Level.