“The tool that’s most associated with the recent progress against malaria is the long-lasting bed net. Bed nets are a fantastic innovation. But we can do even better. We can invent new ways to control the mosquitoes that carry the malaria parasite.”
– Bill Gates, October 19, 2011 at the Global Health Council in Seattle

When an infected anopheles, or a mosquito that carries malaria, bites you, its saliva delivers the malaria parasite into your bloodstream. From there, the parasites travel to your liver where they mature and reproduce. You’ll feel the symptoms within 8-25 days. You’ll be bed bound with headaches, joint pain, and a severe fever characterized by cold sweats, shivering, vomiting, and convulsions. You won’t be able to work, and will desperately need others to care for you. Even the most promising vaccine for malaria, RTS,S, requires four separate shots and isn’t very effective. 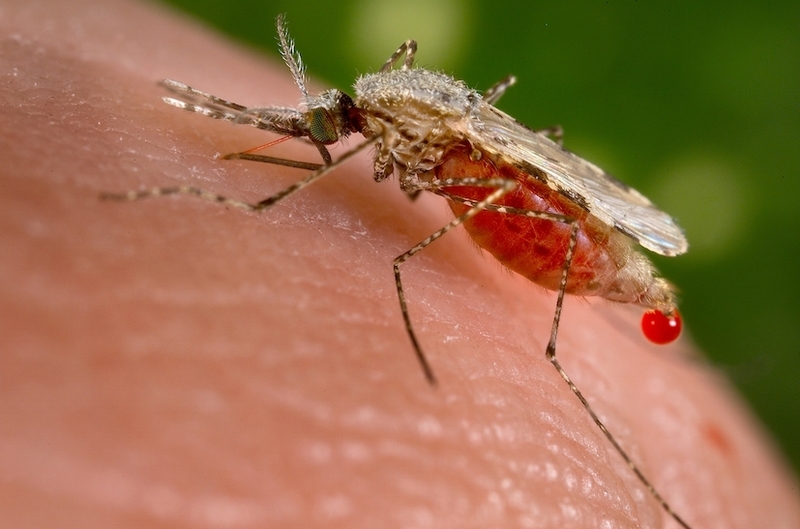 As acknowledged above by Bill Gates, a major factor in fighting malaria was, and still is, the mass distribution of long-lasting insecticide-treated nets (LLINs). These nets are draped over beds and shield sleepers during the vulnerable hours of the night, which mosquitoes favor.

If nets are our shields, then indoor residual spraying (IRS) is our sword. After mosquitoes bite and feed, they like to rest and digest. By spraying insecticide on their preferred resting surfaces, such as the interior walls of homes, or the undersides of chairs and tables, we can poison and kill mosquitoes before they can fly off and spread malaria.

The Limits of Nets and Pesticides

While LLINs and IRS have shown promise, there are true limits to the effectiveness of these preventative and reactive strategies. Not everyone has access to a mosquito net, and many who do find it inconvenient and prefer to sleep without. Indoor pesticide spraying is dirty, dull, and dangerous, and it exposes manual laborers to harmful chemicals.

In addition to a troubling plateau in anti-malaria funding, there is increasing evidence that mosquitoes are developing resistance to insecticides. Worrisome statistics from the 2018 WHO report on malaria show that in recent years, the 10 African countries with the highest malaria burden have actually witnessed a 3.5 million increase in the number of malaria cases.1

Despite all of our progress in fighting malaria, we stand at a critical turning point where we must invent new ways of controlling mosquitoes. 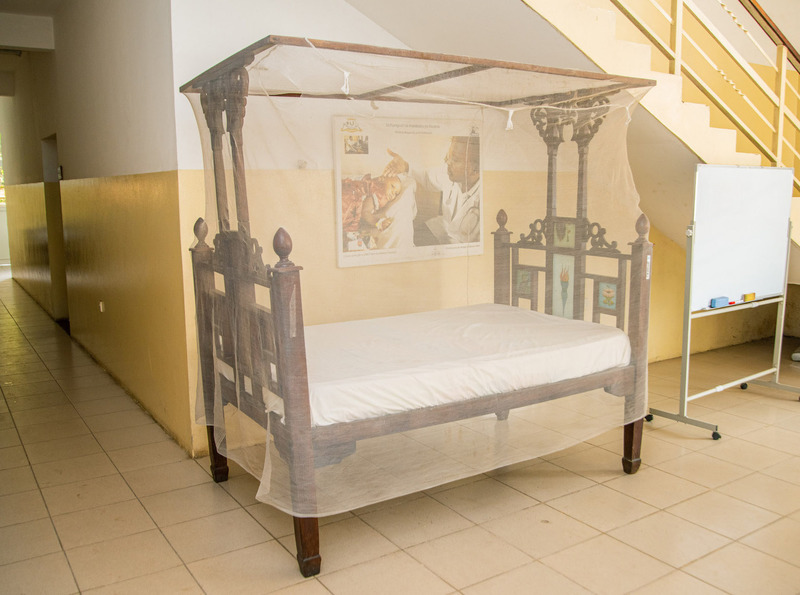 Taking the Fight to the Mosquitoes

An alternative strategy we can adopt in parallel with bed nets and indoor spraying is larval source management (LSM). In contrast with preventative and reactive nets and pesticides, LSM is a proactive and preventative method of drastically reducing mosquito populations. Female mosquitoes lay their eggs in still, shallow waters like swamps, puddles, or the banks of rivers and ponds. In theory, by applying interventions at these habitats, we can disrupt the mosquito life cycle during the egg, larva, and pupa stages before they reach adulthood, suppress their populations, and ultimately prevent the spread of malaria.

However, larvicide and larval source management is limited by our ability to find and treat every single potential breeding site because any shallow body of water can harbor the next generation of malaria vectors.

This is where drones can come into play.

While the practice of using drones to assist in combating malaria is still new, and while optimal practices and workflows are still being established, there is very promising evidence that drones can play a major role in upscaling the battle against malaria.

Drones can assist in every stage of the war on malaria, from delivering malaria medicines to remote areas, to mapping and building 2D & 3D models of flood-prone terrain, to identifying every potential breeding site, to remotely detecting and monitoring mosquito larvae counts, to even deploying larviciding agents at each site.

A major breakthrough that drones provide in LSM efforts is the capacity to identify every single larval source.

Traditional field surveying techniques of mosquito breeding habitats are conducted on foot, and due to the dynamic nature or complicated terrain associated with these habitats, it can be difficult and dangerous, as well as unfeasible to gather spatially and temporally accurate representations that can be acted on, especially for larger bodies of water.

Low-flying airplanes or helicopters are too expensive to realistically rely on for breeding site identification and monitoring.

Satellite mapping of spawn pools is limited by the low spatial resolution of the images captured, the necessity of clear sky weather conditions, the fact that satellites have inflexible fly-over schedules, and that their data is costly.

Drones avoid all of these limitations in that they are relatively inexpensive, can be deployed at any time, fly beneath occluding cloud cover, and gather much higher resolution images. 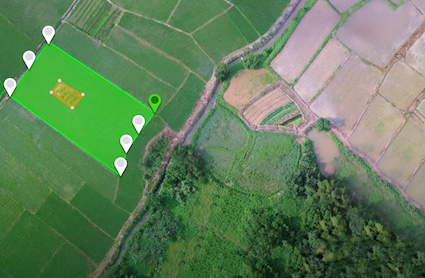 In a 2019 study assessing the viability of drone multispectral scouting for LSM, researchers in Peru manually collected water samples from 31 separate bodies of water and quantified the number of mosquito larvae and pupae in each. Independently, they flew a drone with a multispectral camera to measure the spectral profile of each body of water. Using the multispectral maps, they predicted which water pools host mosquito larvae, and compared their predictions with the actual water samples, or field data gathered. Their results found multispectral imagery can help predict, with 86.73%- 96.98% accuracy, which bodies of water have and don’t have mosquitos.2 These findings suggest a significant new weapon in our war on malaria which can cheaply, efficiently, and accurately identify targets for LSM. 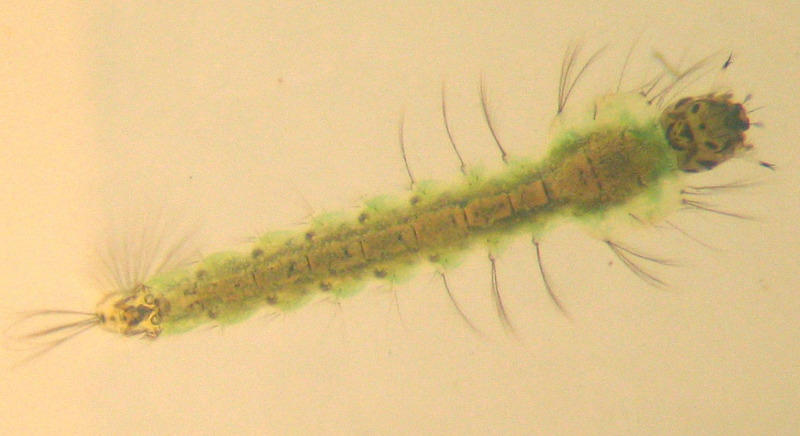 Aerial imagery can map out terrain, identify potential mosquito breeding sites, and even predict which bodies of water we should prioritize for treatment. After gathering this critical intelligence, spraying drones can be flown over these sites to deliver a larviciding agent, Aquatain AMF.

Ongoing research in Zanzibar is currently investigating the effectiveness of using the DJI Agras MG-1S to spray Aquatain AMF over irrigated rice paddies. To learn more about this experiment, click here. 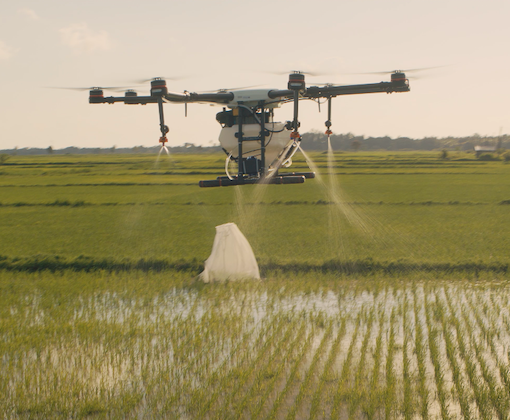 An aside on Aquatain AMF

Aquatain AMF, or polydimethylsiloxane, is a silicon-based liquid developed specifically for mosquito larvicide. This clear liquid’s density is just a bit lower than water, but it has a high viscosity, so it feels like honey. When a small amount of Aquatain is applied to a body of water, it spreads across the surface where it sits/rests as a thin film.

When mosquito larvae and pupae swim to the surface to breathe, they encounter the Aquatain layer which serves as a barrier and prevents them from breathing atmospheric oxygen. Within two days, all of the mosquito larvae and pupae perish/drown. As an added bonus, female egg-bearing mosquitoes also tend to not lay their eggs on Aquatain-treated water and choose to find another location.

Silicones, like the ones in Aquatain, are some of the world’s most widely used polymers and are inert, non-toxic, biodegradable. Gradually over the course of 3-4 weeks, UV rays from the sun break the Aquatain down at an atomic level, leaving the water it’s in drinkable afterwards. This is essential because, for applications on bodies of water like irrigated rice paddies, while traditional application of chemical insecticides would cause damage to the crops and those tending and eating the rice, Aquatain is harmless. Critically, the mechanism of action for Aquatain is entirely physical, rather than chemical, so mosquitoes can’t develop a resistance to its effects.

Aquatain has already been approved by the WHO, and there is no shortage of scientific evidence of its efficacy.

We’d love to hear from you

DJI is proud to join the fight against malaria. We strongly believe that technology, creativity, and collaboration can help make the world a safer, healthier place.

Drones can play a role in every stage of larval source management from mapping and identifying breeding sites, to targeted spraying and larvicide, to surveillance and monitoring. This is just one example of how innovators have taken these tools and applied them in novel ways to solve real-world problems.

We love to hear about any way drones are used for good.

If you have any stories about innovative drone use cases, please let us know!