The suburbs of Decatur, Georgia host the typical daytime scene. Families relax inside, couples walk their impatient dog along the regular neighborhood route, and kids joyously run up and down the sidewalks along South McDonough Street. But at one address, a growing plume of smoke rises, jolting this peaceful community into full alarm.

Within minutes, the Decatur Fire Department springs into action. The sirens of Quint 1— the department’s flagship engine — speed towards the home. As the first on scene, the team onboard have two priorities: establish the critical water supply and obtain a detailed visual assessment of the scene to immediately answer:

Once the team has Quint 1’s pump running from a nearby hydrant and answers to these immediate questions, they quickly form a plan of action as more firefighters fill the street. The incident commander spurs each firefighter into action, while remaining alert to react at a moment’s notice to any change in the volatile situation.

At the commander’s orders, one firefighter takes to the roof with an axe, chopping open a hole to ventilate the building. This directed the fire up and away from the home, allowing a team to enter relatively safely on through the front door. With this team securing the buildings’ foundation while smoke flowed out the roof, a second team quickly shifts to coating the surrounding houses with water, securing them from the bellowing inferno.

Despite the teams’ efforts, the house continues to shoot flames from its roof, threatening nearby trees. Magnifying this risk is the thick brush behind the home, blocking a clear view. The onsite commander takes notice and quickly repositions the teams to increase visibility to this area, which proved to be a pivotal decision. Quick assessments, a second-nature awareness, and a winning strategy led the firefighters’ heroic efforts to battle the afternoon blaze.

With efforts properly concentrated on the most threatening areas, the team was able to extinguish the fire, prevent a potential forest fire, and most importantly, save all lives involved.

Looking at this story of a successful firefighting mission, one thing becomes clear: a team is only as good as the information it collects. Without Quint 1’s initial observation, the team wouldn’t have responded to the most critical section of the fire, potentially allowing for the situation to worsen. These emergencies suddenly change, calling on the team to constantly reconsider its approach to best contain and subdue the fire, which is impossible to do without a steady stream of information.

In an effort to obtain this real-time information, the Decatur Fire Department deployed a DJI Inspire 1 drone on-site to best visualize the scene above the thick smoke. Deputy Fire Chief Stephanie Harpring, incident commander of the fire on South McDonough Street, spoke about the benefits of this constant aerial perspective, remarking that the Inspire 1 “Showed if we were making progress, or needed to change our tactics.” In this case, Harpring used this aerial data to assess the potential of the fire spreading to nearby properties and view the backside of the property to consider the risk to nearby trees. 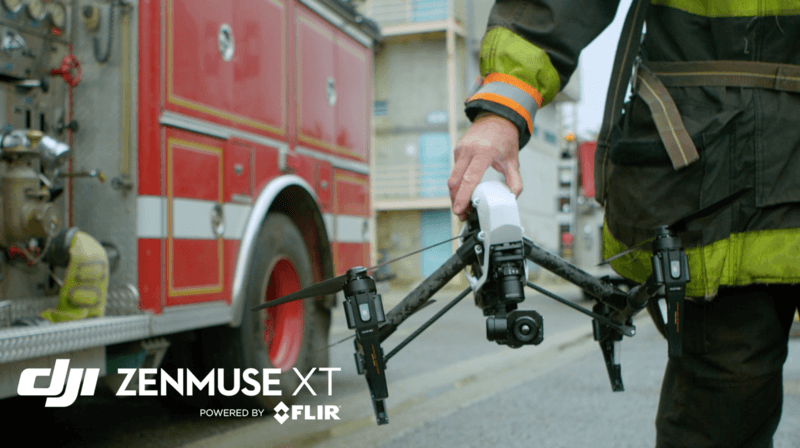 Although firefighters find this aerial visualization tool invaluable for helping them douse flames and save lives, many teams have yet to re-order their operations to use this new tool for its most valuable use: getting the first 360° on-site observation. Without a drone, the first team needed to perform a standard manual observation, a less-detailed and slower process.

Despite teams still working out operating procedures to best leverage this technology in these high-intensity field operations, DJI drones are already proving a valuable resource. “The FLIR imagery [from the DJI Zenmuse XT thermal camera] helped us to immediately locate the fire underneath the roof and other locations where it could not be seen,” said Harpring. “That helped us to assess where to direct our fire attacks.”

In addition to spotting fire progress with thermal sensors, DJI drones can quickly evaluate the risk of the fire jumping to a nearby house. Previously this was done manually by sending a firefighter to look from inside or have them climb a 60-ft aerial apparatus to look over the top of the house. These methods were dangerous and time-consuming, using resources better spent on directly fighting the fire.

For the Decatur Fire Department, the benefits gained from the Inspire 1’s visual report was instrumental. “That was the best part of having the drone,” noted Harpring. “We’re a smaller department, and it allowed us to essentially increase our staff by getting information from the drone we wouldn’t have gotten otherwise.”

With the ability to record, firefighters have found that the aerial video from their DJI drone was crucial for after-action review, improving both training and forensic investigations.

According to Harpring, “Evaluating what our fire personnel did and when is crucial for finding areas to improve.” Each time a firefighter suits up and heads into a burning building, they’re not only fighting to save lives or prevent property damage, but they’re also risking their own well-being. The video from the DJI drone not only helps better save lives on-site, but also helps firefighters improve their operations to minimize the risk to themselves in the future.

“All in all, it was incredibly helpful to our incident commanders to have the drone out there. We were able to use both the daylight and thermal images to make real-time decisions about the best way to fight this fire, and all without endangering anyone’s life.”

This account was provided by Matt Sloane, president of Skyfire Consulting – a company dedicated to assisting firefighting and rescue teams with integrating UAV technologies into their operations. Matt quickly deployed his DJI Inspire 1 for the City of Decatur, Georgia Fire Department to assist in this case.