Anhydrous ammonia is highly toxic and extremely volatile. The chemical is commonly used for industrial refrigeration but can blind, suffocate, burn, and kill those it comes into contact with.

It’s the kind of substance you want to avoid at all costs, but for the Southern Manatee Fire & Rescue (SMFR) HazMat Team, the job requires them to do the opposite and head towards the danger.

On November 14, the SMFR HazMat team arrived on the scene of an anhydrous ammonia leak inside a food distribution warehouse in Sarasota, Florida.

A fire alarm connected to a chemical monitoring system inside had been triggered. The first crew on the scene - from the Sarasota County Fire Department - was working to establish the source of the leak.

But the investigation was proving difficult from inside the building. All the first responders knew for sure was that ammonia was leaking onto the roof but didn’t know from where. The next step was to inspect the external chiller and the warehouse’s exhaust fans to potentially find the origin of the leak.

As is almost always the case in HazMat scenarios, the team needed to get a closer look to confirm what they were dealing with. That initial uncertainty is a constant when dealing with invisible threats.

With HazMat, it’s different. There’s always an investigation to carry out at the scene before action is taken.

SMFR’s HazMat crew was called to assist and offered a capability that’s reshaping how operations of this kind are carried out: An adaptable fleet of drones with thermal imaging capabilities, including the DJI Mavic 2 Enterprise Dual and the Matrice 210 adapted for HazMat response.

A view from above

While the HazMat team was suiting up, a Mavic 2 Enterprise Dual took to the sky and relayed regular and thermal video showing the location and source of the ammonia cloud. Armed with that information, the HazMat crews, working with plant management, were able to determine which valve to shut down in order to stop the leak, and get started on decontamination.

“We used the M2ED because of its thermal and visible light capture capabilities. It’s typically our ‘first out’ system - just because of how rapidly we can deploy it. We could get up and take a look quickly, without having to send our guys up there,” says Gatanis.

The M2ED improved safety for responding technicians by reducing the number of entries needed. The drone flying above ensured the entry team reduced their exposure to a harmful environment and decisions were made from a safe distance. The HazMat team could see the ammonia cloud dispersing and tell where it was coming from.

The SMFR HazMat team’s fleet also includes a DJI Matrice 210 and an Inspire 1 for backup, alongside Zenmuse Z30 and XT cameras. In this case, the M2ED was able to provide all the information needed and the crew’s M210 wasn’t required.

It’s only when you understand the complexity of HazMat situations that you realize why Gatanis describes the information gathered by unmanned systems as “invaluable”.

During an incident, first responders and incident planning teams are separated by distance, time, and operating areas. Crews are spread between ‘cold’, ‘warm’, and ‘hot’ zones - working from the command post, decontaminating those coming from the scene, or dealing directly with the hazardous material.

Splitting up HazMat teams in this way is necessary but creates room for error. Traditionally, a command post’s understanding of a situation is limited by all sorts of factors - distance being the major hurdle. Images from handheld cameras and entry team reports are fallible. Radio contact is notoriously unreliable. And scenarios can escalate in the time it takes to transition between zones and provide a first-hand account directly to superiors.

All of which explains why SMFR’s UAS team wasn’t finished once the ammonia leak had been located. The Mavic 2 Dual stayed in the air to provide situational awareness. Streaming the entry team’s progress back to base improved the team’s performance and safety.

“Previous to drones there was no way to keep eyes on our guys. We relied solely on radio traffic, which is shoddy at best. Having an eye in the sky enhances our ability to mitigate a scene. It helps us understand what they see a lot faster and ensures everyone works from the same operational picture.”

Crews have communication procedures in place, but “nothing compares to everybody looking at the same video in real-time. It allows us to significantly cut down on misinformation.” 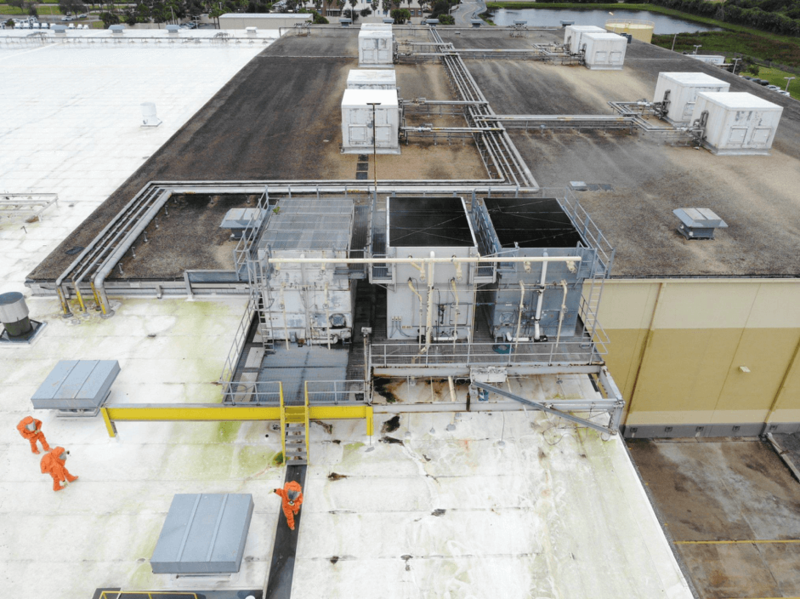 Having an eye in the sky connects the technicians working at the scene with the incident commanders and ensures everyone works from the same operational picture.

By 8:30am - a little over two hours after SMFR HazMat was called to the scene - all crews departed and the facility was back up and running. Without drones in their toolkit, the first responders would have had to make several trips onto the roof because of limited operational time in their HazMat suits. This potentially would have increased the time on scene and downtime for the business significantly.

How drones are taking an active role in HazMat operations

Through his role as SMFR UAS Coordinator, Rich Gatanis and his team at Southern Manatee have pioneered the use of drones in HazMat response. He has developed several solutions to extend the role of unmanned technology beyond situational awareness and was recently invited to share his experience and expertise at the International Firefighters Congress in Bogotá, Colombia. 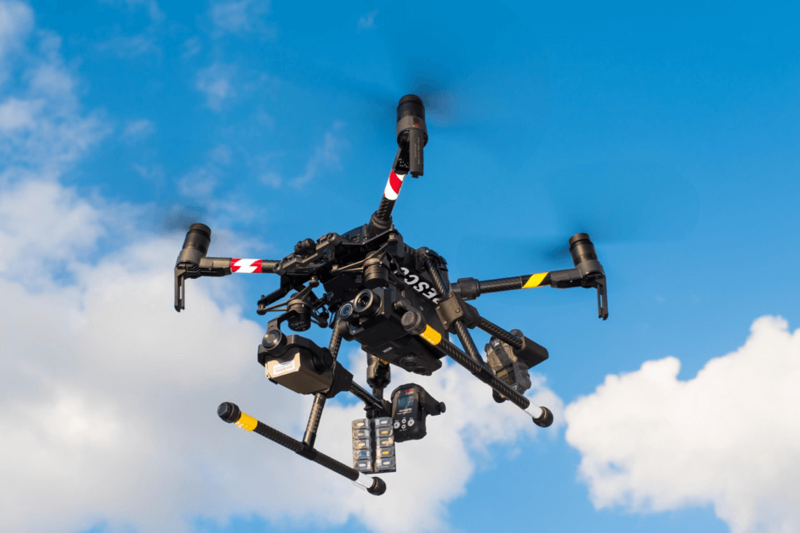 SMFR UAS Coordinator Rich Gatanis has adapted the DJI M210 to carry HazMat meters in order to take an active role on hazardous material scenes, as well as a decontamination process to ensure the drones don’t become single-use equipment.

Last year Southern Manatee devised a flammability test to determine whether the M210 would ignite a flammable atmosphere. They also developed a way to strap chemical, vapor and radiation detection meters to the same platform to provide officers with the intel they need to approach a scene with the right equipment and safety gear. The meters are read using the drone’s onboard camera.

“If I’m in a plastic suit and I go into a cloud that we think is chemical but turns out to be a flammable gas, I’m not protected if it finds an ignition source. It’s extremely important to identify what we’re dealing with.”

Gatanis explains that, typically, a HazMat technician or crew in full gear will go and identify the hazardous material before coming back to share that information so the team can adjust their gear and tactics accordingly.

In the process, thousands of dollars’ worth of equipment can be damaged beyond repair while precious seconds tick away.

Now drones are able to carry out that task with speed and precision. Using the November 14 anhydrous ammonia leak as an example, Gatanis says, “We’ve cut out the first hour by improving our understanding of the situation with 15 minutes.”

This year Gatanis, with the help of FLYMOTION and First Line Technology, developed a decontamination process that enables the team to safely wash down and re-use DJI M200 series drones that have operated in hot zones. SMFR’s video, below, details the solution with DJI’s Senior Director of Public Safety Integration, Romeo Durscher.

Southern Manatee has also been exploring the possibility of using drones to pre-load the scene of an incident with tools or deliver them on demand. Often the HazMat team’s staging area is hundreds of meters from the hot zone. Hitching 2 lbs of gear to a drone makes a lot of sense when the alternative is having HazMat technicians trudge all the way back to collect it.

These meter-carrying and tool-delivering solutions fall into what Gatanis calls the ‘Keep it simple, stupid’ category: uncomplicated but effective customizations that harness drones’ maneuverability to improve safety and save time.

The danger and hazards in every HazMat situation demand the response be slow and methodical. But depending on the environment, slow and steady can add to the danger, too. Gatanis reveals that heatstroke and heat exhaustion are among the biggest risks to HazMat technicians in Florida.

Working in a HazMat suit for a prolonged period under the baking sun is uncomfortable, to say the least. “There’s no heat exchange. All the heat you’re putting out is staying in that bubble and you can have dangerously high temperatures in minutes”

As a result, every journey an unmanned system can take on behalf of a technician is welcome. Like Gatanis says, “If I can minimize risk and use a piece of machinery to do that job, it’s a win for us.”

Drones have gained a foothold in the sphere of public safety and forward-looking government agencies are expanding their use in areas including environmental services, public works, and transportation. Download DJI’s whitepaper to explore the best practices for deploying drones at state and local government level.

We'll keep you up to date with more stories about drones in public safety and other relevant updates.