In their widely covered drone report, Goldman Sachs estimates that the insurance claims drone market represents a total addressable market worth $1.4 billion. The insurance industry has also been one of the earliest to adopt drones, with insurance giants such as AIG, State Farm and USAA having received permission early on from the FAA to use drones to improve the speed with which they can assess insurance claims.

We sat down with David Pitman, CEO at Converge, to discuss the application of drones in the insurance market as well as operational challenges and tips. Converge is a software company committed to making the insurance industry faster and more efficient at claims and underwriting through the use of drones. Converge has worked with large service providers over the past few years to better leverage drone technology, and we’re excited to share their insight with you all. 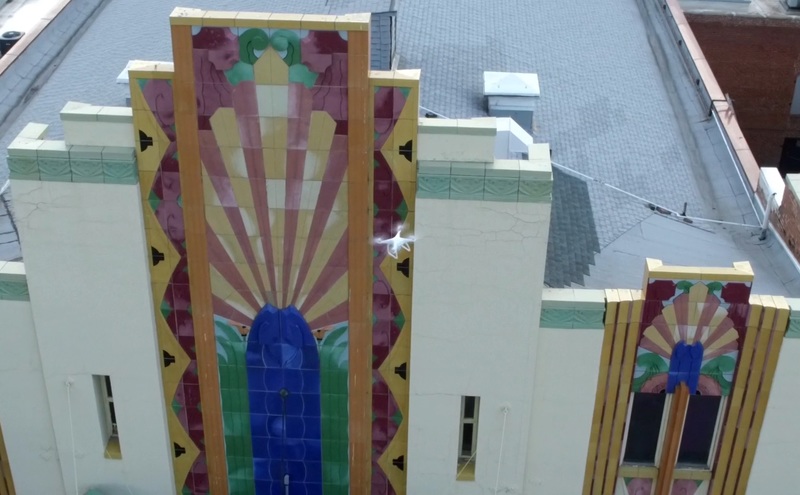 When did you first get involved with drones?

I started working on software for large drones over ten years ago, but the current story begins with my research during grad school at MIT. I was looking at ways to make it easy for soldiers to use micro drones for reconnaissance in cities. As part of that project, my co-founder Paul Quimby and I built the first app in the world that could operate a drone via smartphone. After this project, we started to actively explore applications for drones in the commercial space, with the hope of identifying a way to provide significant value to businesses through drone technology.

We eventually identified insurance as one of the leading industries that will take advantage of drone technology and, towards the end of 2014, we formed Converge to actualize this. Early on in this exploratory phase, I became the first person in the world to fly a drone for insurance. We chose to fly in New Zealand because regulations were restrictive just about everywhere else at the time.

How are drones relevant to insurance companies, and where do they add value?

Insurance is, at its core, a business of assessing, preventing, and mitigating risk. Insurers are constantly looking for better information about the properties they insure. That can be when they’re assessing how much it should cost to issue an insurance policy for a building (underwriting), what damage occurred (claims), or, in the best scenario, preventing claims before they happen (risk mitigation). Using drones to gather photos, video, and data about a property is a big leap in the technology behind this process, but insurers were already doing something similar before with adjusters climbing on ladders and roofs with a digital camera in hand.

The real benefit of drones being used in insurance comes from the gains in safety and efficiency. Companies can move from dangerous, hands-on, time-intensive property inspections, to a quick, safe, and much faster process that allows their workforce to keep both feet firmly planted on the ground.

What does it take to get a drone program from nothing to fully operational?

This is the single biggest problem Converge is helping insurers work through today with our software and in-house expertise. Everyone in insurance is sold on the benefits of incorporating drones into their field operations, but the immediate question becomes “how do I go from, at most, two or three people experimenting with drones at my company, to a fully operational deployment with hundreds of drones in different lines of business?” To successfully do this requires solving three problems: complying with regulations (i.e., the FAA’s Part 107 regulations), managing a drone fleet, and making drones just another tool in an adjuster’s tool belt so that it’s effortless to use in the field.

What does the typical drone flight look like for an insurance adjuster?

You’d be shocked at how little information an adjuster has before they show up at an insured property. Usually, the only details they have are from a form known as the First Notice of Loss (FNOL). And because everyone is in a hurry, the description of the claim may be as vague as "water leaking into the upstairs bedroom." The adjuster then has to solve backward to determine if it's the roof, a bad window frame, or some other cause, to determine how much repairs will cost.

With that in mind, when we observe adjusters in the field, we see them all follow the same pattern. They first need to check regulations and ensure that they can fly in the airspace, and if they're not using software to have this automatically done for them, they're wasting a lot of valuable time. Once they're up in the air, the first step is to get an overview of the entire building and property. This gives them a real-time model in their head that they can use to understand what needs to be investigated, and documented, in further detail. From there, adjusters will use the drone to get more detailed photos or data (like measurements) of particular areas of interest. With our app, we typically see adjusters getting within just a few feet of the building so that they can capture very high-resolution photos from perspectives that match or surpass what they were able to capture with a smartphone while standing on that roof or from a ladder.

For houses, and even most commercial properties, adjusters are doing complete inspections, using a single battery with a DJI drone, in about five to fifteen minutes, vs. hours beforehand. So we're seeing adjusters improve their time-on-site metrics by 10x.

What meaningful results are insurance companies getting from drones?

At a high level, insurers are asking "can we process claims faster?" It's been found that reducing the "cycle time" of a claim, essentially how fast an insurer gets back to the customer at each step in the process, has an enormous impact on their customer retention. With drones, insurers can dramatically reduce those cycle times and improve the experience of the client. Due to the seasonal nature of property damage across the US, we'll need all of 2017 to assess the quantitative impact fully, but early results are very promising.

For individual adjusters, using a drone has been a complete game changer. Not only are they able to avoid getting out a ladder, but what they’re doing with a drone was often impossible to achieve beforehand. This spans from being able to get photos of roofs they cannot walk on due to safety issues or potential damage, to viewpoints such as being able to wrap around the edges and top corners of a twenty-story building.

Visual imagery is currently giving insurers the best return on their investment in sensors, as it is cheap and effective for many uses. For example, the 20MP camera on the Phantom 4 Pro has been phenomenal to work with - several of our customers are getting results that are better than 1mm per pixel of resolution. However, we're also finding that many insurers are interested in using IR to evaluate the condition of roofing. This is where I think a platform like the DJI Matrice 200 will deliver even more valuable insights to an insurance adjuster. For example, depending on the type of roof material, there's a lot of information about the "actual" roof age, water damage, and integrity that is not apparent in the visual spectrum but can be discerned with an infrared image. With the Matrice 210 model, adjusters can capture both visual and multispectral imagery at once, keeping time on site to a minimum while doubling the data obtained.

What sensors are on the horizon that you're excited about?

Depth sensors (LIDAR, etc.) will dramatically change how insurance talks about the actionable data from a property inspection. One of the most popular features we introduced last year was the ability for adjusters and risk engineers to get real-time measurements and roof slopes of what they saw live from the Phantom 4's camera while flying.

With several of these new sensors, it’s also not just about the sensor by itself, but how the data from that sensor is combined with other sensor data, AI, and historical analysis. Imagine if I’m a risk engineer, who helps a customer avoid a future claim by preemptively identifying problems that can be fixed, cheaply, today. So I'm there, trying to determine what the next big potential problem is for this customer's site, and I can see not just an infrared image, but have it overlaid onto a 3D model of a refinery. Then I have an AI telling me that, compared to the last visit, some hot spots have appeared in the insulation around critical pipes in the refinery. I've gone from a single image that gave me some information to a complete, actionable result I can work with that customer on. That's how, by preventing a commercial insurance claim, you can save tens of millions of dollars.

A lot is changing with the FAA - we’ve gone from 333 to Part 107. Where do you see the FAA regulatory structure heading regarding commercial drone flight?

The FAA has been incredibly successful at their primary job: making manned aviation safe for everyone. With drones, they're now being asked to keep the public safe with unmanned drones that can operate in areas no manned aircraft would normally be. At the same time, drones are the future, and the FAA certainly does not want to prevent a new industry from growing. I think we'll see a series of progressively more open regulations, following a model where the FAA trials a potential rule change by issuing exemptions and COAs, then moving the most favorable results into the NPRM process to allow everyone to operate under those standards. There's also a lot of potential for autonomous regulatory compliance. For example, we make it easy for customers to, with one click of a button, automatically understand if they need an airspace waiver before flying, and then get all of the data required for that waiver. Eventually, we'll automatically submit the waiver and track it for them as well. In the field, our app also ensures that pilots are compiling with Part 107 regulations, and keeps the drone within the property boundaries of the insurance company's customer. Our view is that the best way to ensure regulatory compliance is to make it entirely automated and seamless in the workflow.

Ultimately, most of these regulations come down to a question of safety and similar risks: a micro drone weighs around four pounds, so having one fall from the sky while inspecting a house is arguably far safer than that twenty-pound ladder you would put up if you had to climb onto the roof instead.

To learn more about Converge please visit their website here